Embracing Your Mess as a Leader 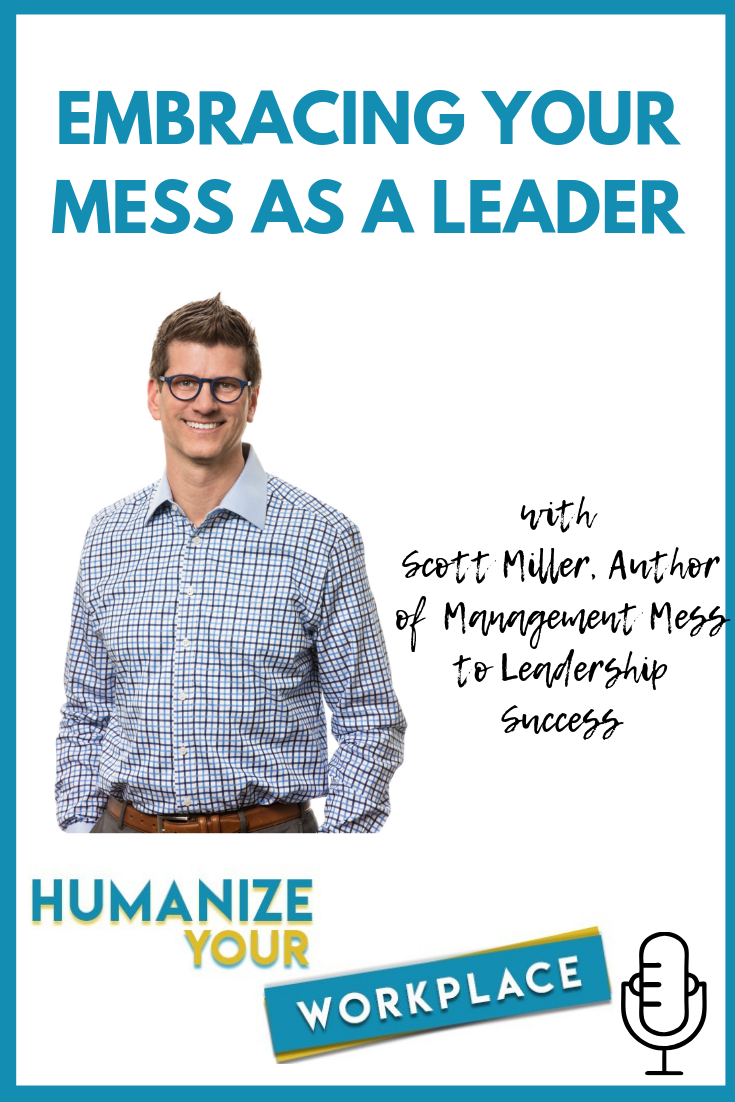 On this week’s episode of Humanize Your Workplace, we’re joined Scott Miller.  Scott is a 23-year associate of FranklinCovey and serves as the executive vice president of thought leadership. His new book, Management Mess to Leadership Success: 30 Challenges to Become the Leader You Would Follow is an Amazon best seller.  We talk about:

To listen to this week’s episode, head over to Google Podcasts, Spotify, Apple Podcasts, or Stitcher, check it out below.

Who would you like to thank for making an impact on who you are professionally?

Over the course of my 30-year career, I am the product of about 12 exceptional leaders and one that stands out on the top is David Covey. He happens to be the third eldest son in the long line of Covey children.

David Covey was my boss for the better part of five years and he really gave me permission to identify and run with my strengths. He gave me permission to be the leader that didn’t make excuses for my weaknesses, but really helped me flourish around knowing what my passions and strengths were. I still had to manage a P&L and meet my revenue goals, but as a sales leader at the time, he really empowered me and released me to be proud of my strengths and tripled down on them.

I think it’s rare, but I think it’s also now required. People don’t quit their jobs, they quit their bosses and their cultures and so it needs to be the new norm or people will quit. With an unemployment rate of 3% people have options. Every leader has got to become that leader or you’re going to be leading a revolving door of people.

If you could pick three things from your book that you might face in the first 90 days of a management role, what would they be? How can we work around them?

Honestly all 30 of them could be used in your first 90 days and the challenges were really culled from across Franklin Covey’s 20-plus different leadership solutions. But to answer your question if I had to pick three, I would say challenge 4, 11 and 21. Challenge 4 we call “declare your intent”. Leaders need to not have hidden agendas. When you’re going into a meeting, having a high-stakes conversation, somebody’s role needs to change, or you need to increase their performance say, “Alissa I can see a great career here for you at Google and I’ve got your best interest in mind and there are several very specific behaviors that you’re exhibiting that if you continue these they’re going to become a No Deal and it’s going to end up in you losing your job.”

Now I was very clear, I said I see a great career here for you and you have got to change some things if you want to fulfill that. So be transparent because absence of facts people will make stuff up and the moment there are suspicions about a person’s motive, everything that you do becomes suspect to interpretation.  Be very clear about what your real motive is.

The second challenge, 11: check your paradigms. Every one of us have deeply entrenched belief windows and paradigms. The way we see the world, our company, ourselves, our boss, our industry; they’re instilled in us since birth by our parents our teachers.

One of my biggest management messes is when I meet someone for the first time, I tend to take a snapshot of them and hold them to that forever. If you are a 23-year-old event planner making $36,000 a year, you are always in my mind a 23-year-old event planner making $36,000.  Even if now you’re 35 years old and you’re a top salesperson making $200,000. And so, I need to do a better job of recognizing I don’t have the full picture, I don’t have all the facts, my paradigms are jaundiced by my emotions and my own insecurities.

Great leaders recognize that they may need to evolve and challenge the factuality of your paradigms, about everything including; your own confidence and your own people’s confidence competence.

And then lastly, I’d say challenge 21: allow others to be smart. This concept really is popularized by a dear friend of mine Liz Wiseman. She wrote an amazing leadership book called “Multipliers.”  Too often leaders try to be the genius and not the genius maker. We don’t always have to be the smartest person in the room.

When I was the Chief Marketing Officer at Franklin Covey for almost a decade, the team had a saying, “You know best idea wins as long as it’s Scott’s.” It’s a bit of a joke but it kind of wasn’t. I’ve matured and become humbler and more confident in surrounding myself with smarter people than me. My job is to recruit and retain talent and not to be the smartest person in the room. So, ask yourself “do you have humility whether you are a 25-year-old first level leader for the first time or you’re a 65-year-old CEO? Can you check your ego and let other people talk freely and have their ideas bubble up?” They may say the wrong thing or not have it all fleshed out, but people want to feel smart they don’t want to feel like they’re working for the genius who’s the know-it-all. 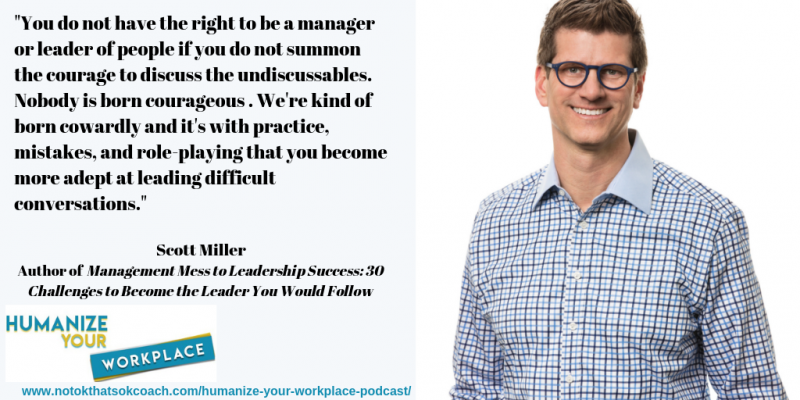 Can you share an experience where you took on one of those difficult conversations that actually led to a better relationship with somebody on your team?

I can share half of that. I think I’m going to share one that did not lead to a better relationship. I think this is the most underrated and under addressed leadership competency, period. You do not have the right to be a manager or leader of people if you do not summon the courage to discuss the undiscussables. Nobody is born courageous. We’re kind of born cowardly and it’s with practice, mistakes, and role-playing that you become more adept at leading difficult conversations.

The prior leaders to you typically were either cowardly or just abandon them. It is your legacy to be able to talk to people with their best interest in mind, with diplomacy, care, empathy, but also with clarity. I think it is abandoned by too many leaders.

There’s one individual who worked with me who is arguably the most talented person in their field I’ve ever met, and I’ve worked for some major brands. This person is incapable and refuses to ever take responsibility for their own mistakes. Of course, they make mistakes we all do but they’re so insecure about their self-worth or their self-esteem. This is a very fine person with high character and high competence, but they cannot stand for anybody else to shine and they can’t stand to ever look like they made a mistake.

I sat this person down twice, closed the door and said, “Listen, at the end of this conversation it might be leading in your termination. I actually don’t know how it’s going to end but here are some very specific things that you absolutely have to change or there are no deals. And by the way I don’t want to let you go because this organization needs your talent desperately.” And I rattle off the five things you have to be able to communicate with other people in your division; share assets; be abundant; share files; sit down and coach your staff. Because if you don’t, they’re going to quit not because of me but because of you.

I discussed in brutal detail exact situations that they need to change that they never heard before.  This person broke down, was very tender and confessed some of their own insecurities and they never changed.

Now the fact of the matter is you might say they ‘called my bluff.’ I didn’t fire them because this person’s talent is so valuable.

I role-played it with HR and with a confidential executive and I open these conversations with, “Alissa it’s a sensitive topic I want to address with you. Before I begin, I want you to know two things; I’m on your side, I have your best interest in mind, everything I say has held confidence in this room. I’m probably not going to say this in the right way and I’m probably going to trip up. Would you please forgive me on the words I’m going to use? My intent is to help you. I might ask for a do-over if I say something wrong.”

The majority of time people will realize he’s not out to get me.

Alissa Carpenter
Workplace Communication Speaker and Trainer at Everything's Not OK and That's OK
Alissa Carpenter is the Owner of Everything’s Not Ok and That’s Ok, author of How to Listen and How to Be Heard: Inclusive Conversations at Work, TEDx speaker, and host of Humanize Your Workplace.She works directly with organizations to bridge communication gaps across generations, job functions, and geography and has worked with non-profits to multi-billion-dollar enterprises.She has an MEd in Social and Comparative Analysis in Education, is a Gallup-Certified Strengths Coach and is certified in the Strong Interest Inventory and Myers Briggs Type Indicator.Alissa has been featured on ABC, CBS, NPR, FOX, Forbes, and quoted in multiple media outlets including CNN Money and Fast Company. 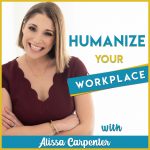 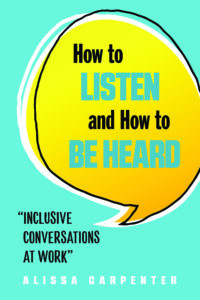